Witness the cultural and royal heritage of India with our Golden Triangle Tour with Jodhpur & Udaipur. The well-planned itinerary will take you across the renowned monuments, forts, palaces, and other architectural wonders across Delhi, Jaipur, Agra, and Udaipur as well. Enjoy activities like read more

Witness the cultural and royal heritage of India with our Golden Triangle Tour with Jodhpur & Udaipur. The well-planned itinerary will take you across the renowned monuments, forts, palaces, and other architectural wonders across Delhi, Jaipur, Agra, and Udaipur as well. Enjoy activities like an elephant ride and shopping in Jaipur’s markets for a memorable time.

Plan a Golden Triangle with a Jodhpur & Udaipur tour package and embark on a lifetime journey to explore the rich heritage culture of India. Avail excellent services like assisted transfers, meals, comfortable accommodation, and sightseeing tours.

On arrival at Delhi International Airport you will be greeted by our representative & transferred to your pre – booked hotel. Then The capital of India was destroyed and rebuilt a number of times, and virtually carries in its bosom the history of 07 cities. The present New Delhi was designed by Edwin Lutyens, and its main architect was Herbert Baker. In 1911 the capital of the British Raj was shifted from Kolkata to Delhi. Today it is the seat of power of the country and a major Gateway to the country for the tourists.Old Delhi visit Raj Ghat which is located on the banks of the river Yamuna, This is Mahatma Gandhi’s Memorial, where he was cremated following his assassination in January 1948. The memorial lies in the midst of landscaped gardens and made of a simple square platform of black marble inscribed with his last words “Hey Ram”. Red Fort (closed on Monday) the 17th century imposing fortress built in red sandstone is surrounded by a huge boundary wall 33m high. Inside are exquisite palaces and beautiful gardens. Opposite the Red Fort lies Jama Masjid (Friday Mosque) made of red sandstone and white marble, completed in 1656.  It is India’s largest mosque where more than 20,000 people can kneel in prayer at one time.New Delhi visit Humayun’s Tomb, built by his wife Haji Begum in the 16th Century. An early example of Mughal architecture considered the predecessor of the Taj Mahal. The Qutab Minar, the landmark of Delhi, a huge tower of victory started in 1199 and completed in 1368. The Minar is 72.5m high with a diameter at the base 14.4m and 2.7m at the top. Proceed to the Rashtrapati Bhawan (Drive Pass) once the Viceroy’s residence and now the official residence of the President of India. Designed by Lutyens, it combines western and eastern styles - the dome reflects the Buddhist stupa, the chhattris “Hindu” and the graceful colonnades very “British”. It has 340 rooms. The India Gate (42m), commemorates the 70,000 Indian soldiers who died in the 1st world war. 13516 names of British and Indian soldiers killed in the Afghan War of 1919 are engraved on the arch and foundations. Under the arch, glows the Amar Jawan Jyoti flame commemorating Indian armed forces’ losses in the Indo-Pakistan war of 1971.  Stay overnight at the hotel.

Drive to Agra . On arrival check in at hotel . A medieval city on the banks of the Yamuna River. It was founded by Sultan Sikandar Lodi in the year 1506. Agra achieved fame as the capital of the Mughal emperors from 1526 to 1658 and remains a major tourist destination because of its many splendid Mughal-era buildings. Most notably the Taj Mahal, Agra Fort and Fatehpur Sikri, all three of which are UNESCO World Heritage Sites.Agra Fort was originally a brick fort and the Chauhan Rajputs held it. It was mentioned for the first time in 1080 AD when a Ghaznavide force captured it. Sikandar Lodi (1487-1517) was the first Sultan of Delhi who shifted to Agra and lived in the fort. He governed the country from here and Agra assumed the importance of the second capital. He died in the fort in 1517 and his son, Ibrahim Lodi, held it for nine years until he was defeated and killed at Panipat in 1526. He built several palaces, wells and a mosque in the fort during his period. World famous monument The Taj Mahal, Overlooking the River Yamuna, the Taj Mahal is a classic example of Mughul architecture, with the Taj itself built as a mausoleum at the northern end of an extensive formal walled garden designed in the charbagh style and structured on the Islamic theme of ‘paradise’. The whole site was built by Shah Jahan between ad 1632 and 1653 as the final resting place of his favourite wife Arjumand Bano Begum (also known as Mumtaz Mahal) who died in ad 1631 shortly after giving birth to their fourteenth child. Upon his death in ad 1666, Shah Jahan was buried alongside his wife in the Taj. (Closed on Fridays).Stay overnight at the hotel.

Drive To Jaipur via Ftehpur sikri . On arrival check in at hotel .

After breakfast in the morning you will be taken for Amber Fort, the majestic fort located at the top of Aravali Hills. Take a short ride on elephant’s back to reach at the fort, an overwhelming experience.

Come back to the city & visit the City Palace, a perfection of Rajput & Mughal architecture, Palace of Winds popular as Hawa Mahal, a five storied building built in 1799 to enable the royal ladies to view the outside life & world.

Later opt for Jantar Mantar, an astronomical observatory. Return to the hotel and stay overnight.

Drive to Udaipur . On arrival check in at hotel .

Today we visit Udaipur, also known as the city of sunrise.We start our sightseeing with the visit of Sahelion-Ki-Bari. This Garden of the Maids of Honour is well laid out with extensive lawns and shady walks. After the visit of Garden of Maids we visit a Museum of folk art. This museum has a rich collection of Folk dresses, ornaments, puppets, masks, dolls, folk musical instruments and paintings on display. After a break we proceed to city palace, the biggest Palace in India, where 4 generations of Maharajas added their contribution, is so carefully planned and integrated with the original buildings that it is difficult to believe that it was not conceived as a whole.The museum of the palace includes the beautiful peacock mosaic and miniature wall paintings of Indian mythology. Today we have an opportunity to visit a traditional painting school and see the famous miniature paintings done.In the evening we have a Boatride on the lake Pichola.The famous Lake Palace of Udaipur was the summer residence of the former rulers. The James bond Film Octopussy was shot here and made this palace more known in the west 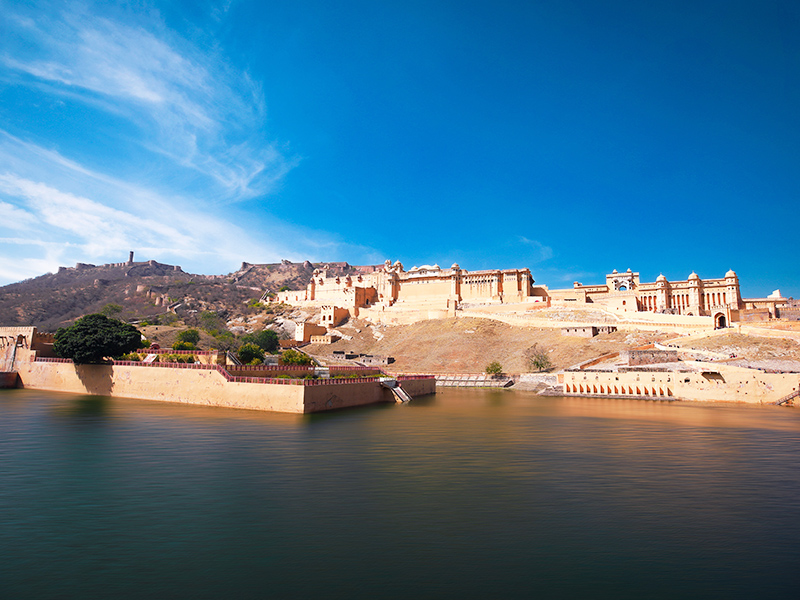 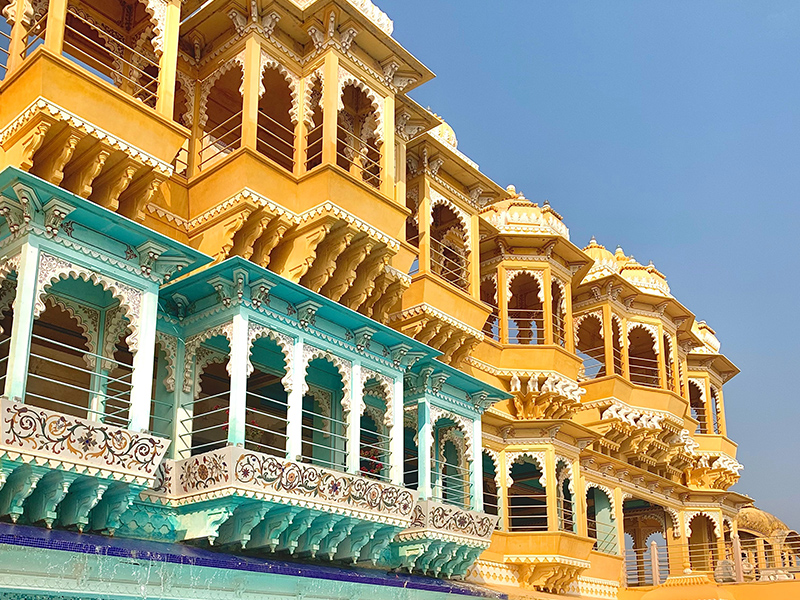 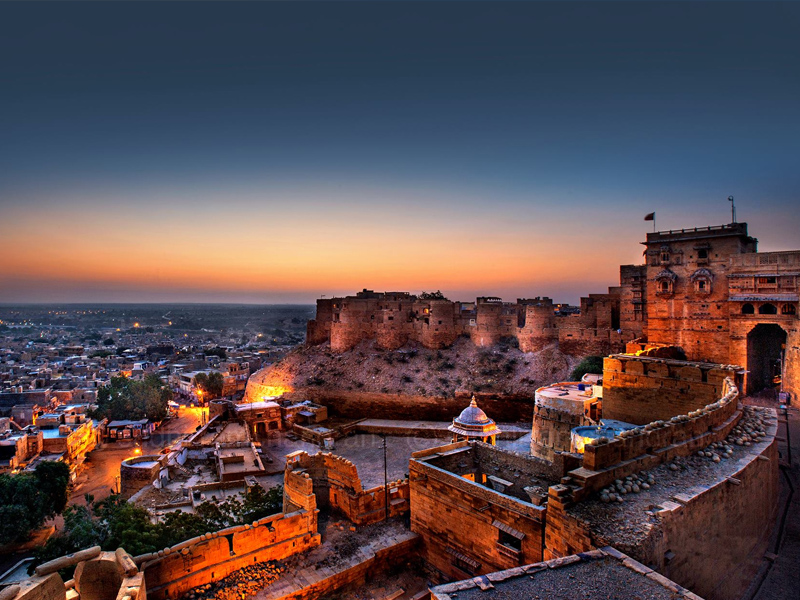 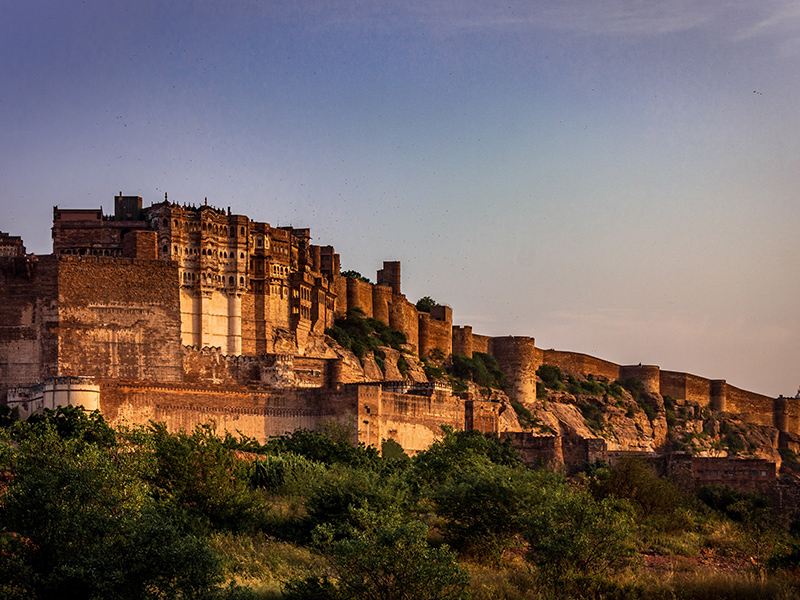